The main objective of erecting 'Open-air museum’ was to create a complex of buildings/building uses aimed at promoting the Polish tradition and cuisine. The individual elements of the complex were to be modern, while referring to the character of the Polish village. The plot is located in the village of Kamyk near Czestochowa. On a pretty large area there are currently two small ponds, between which the largest building acting as a home wedding and a restaurant is to appear first. One of the main guidelines regarding this building was to ensure that three wedding receptions could take place inside it at the same time. Each wedding reception would be hold using one common kitchen. At the same time, a flexible arrangement had to be ensured, so that combining individual parts for larger events would not be a problem. The building architecture was to be modern, while relating to the environment. Therefore, the roofs covering the three main parts of the wedding house were thatched. Simple white walls with large glazed surfaces merge the building, giving it a contemporary character. Owing to the large glazed surfaces, wedding halls open to the surrounding nature and atrium located inside.

The next stage of the investment is a small building intended mainly for wedding guests. It could have been designed as a part of the first building, but due to difficulties with its use we decided to design it as a separate body. The use is very simple: six guest rooms and technical-economic spaces necessary for the building to operate. The biggest challenge proved to be designing such a body that would correspond with the scope and character of the village and complement the wedding house. Finally, we proposed an unusual solution that, in our opinion, best answered the presented problem. We treated each of the guest rooms as a separate object representing a small house. Juxtaposing six slightly different from one another wooden solid figures gave an interesting result. Just like in the case of the first building, the small white figure that merged wooden elements complements the hotel use, while initiating a dialogue with the wedding house building. 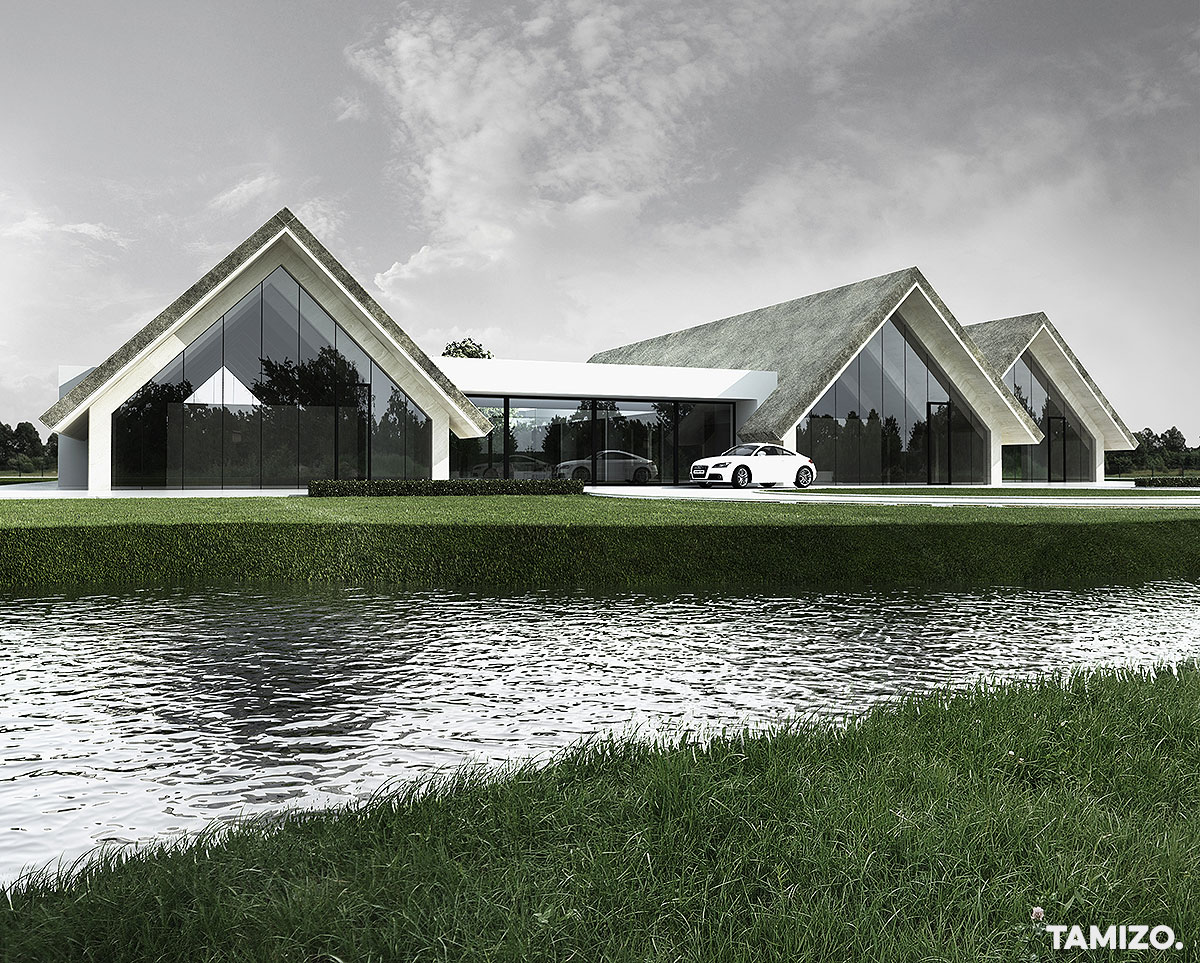 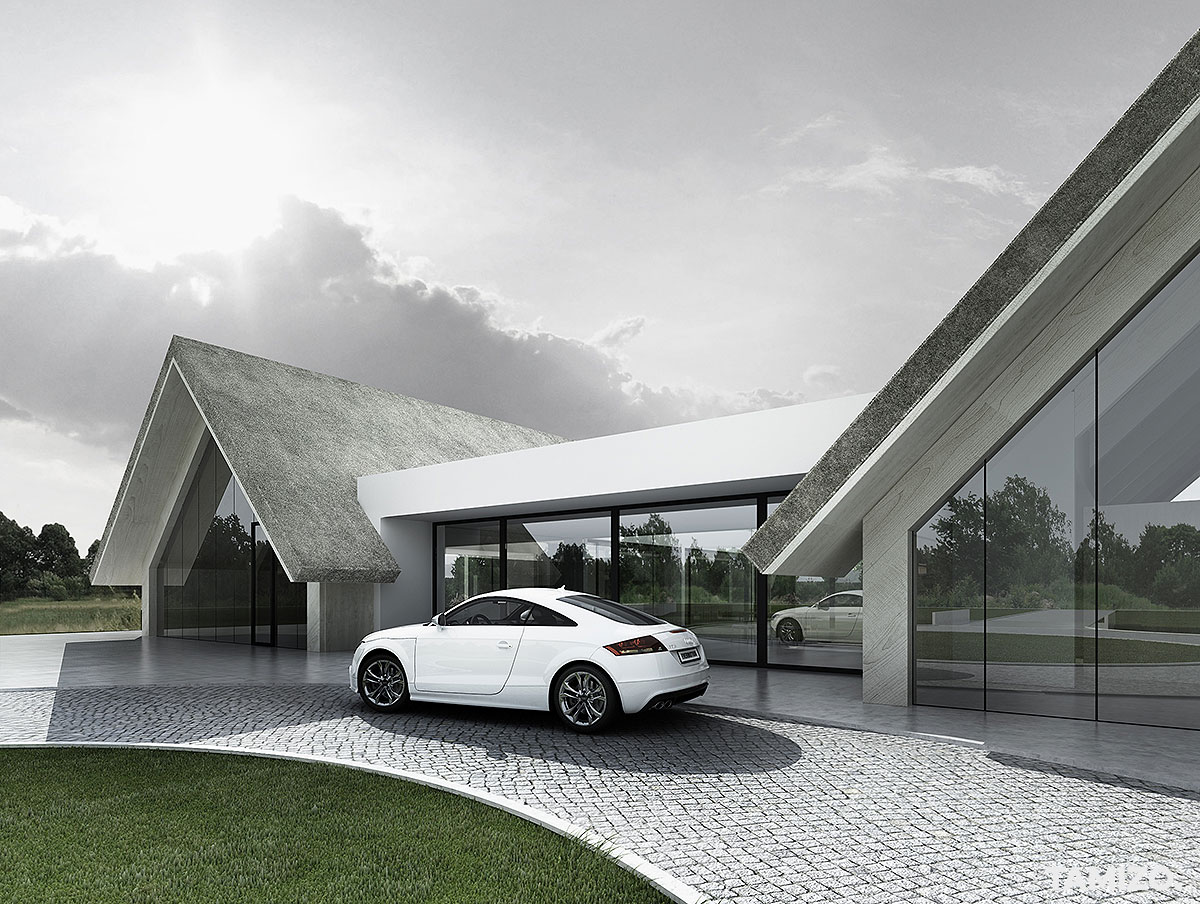 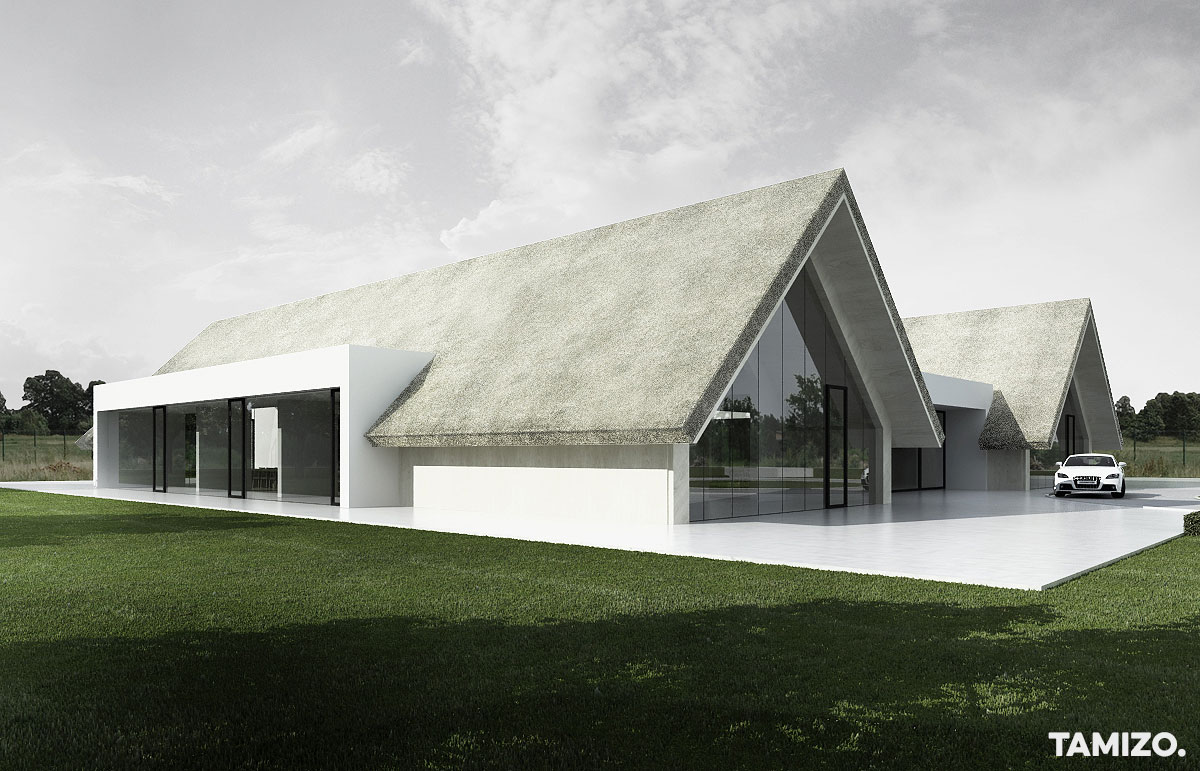 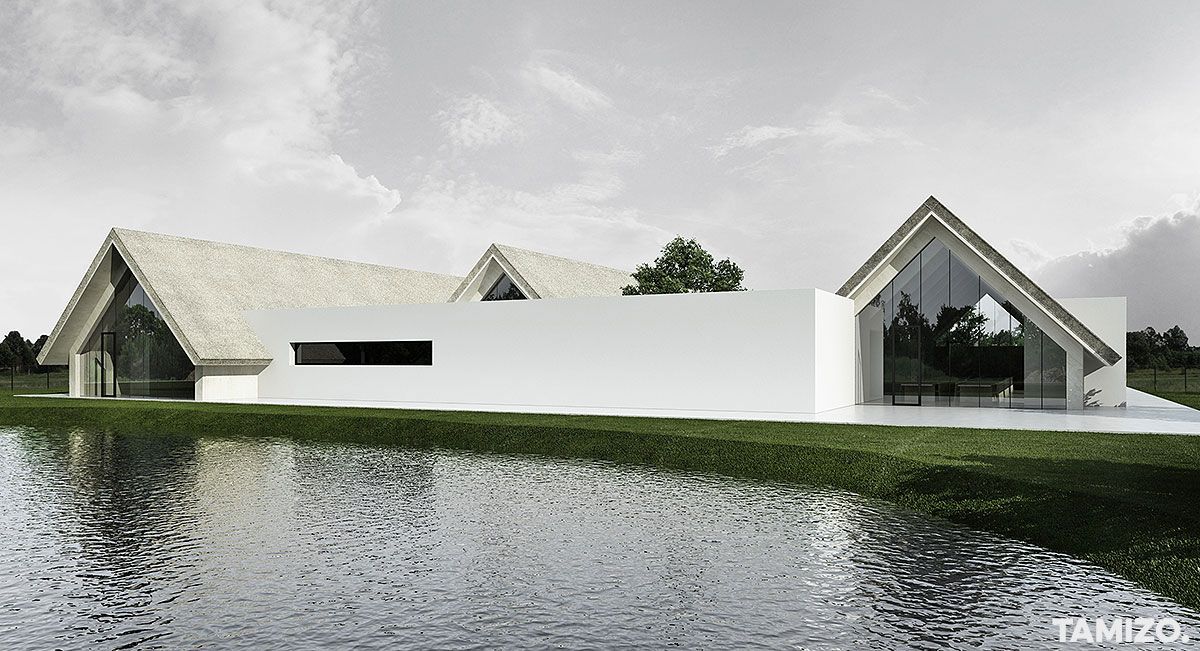 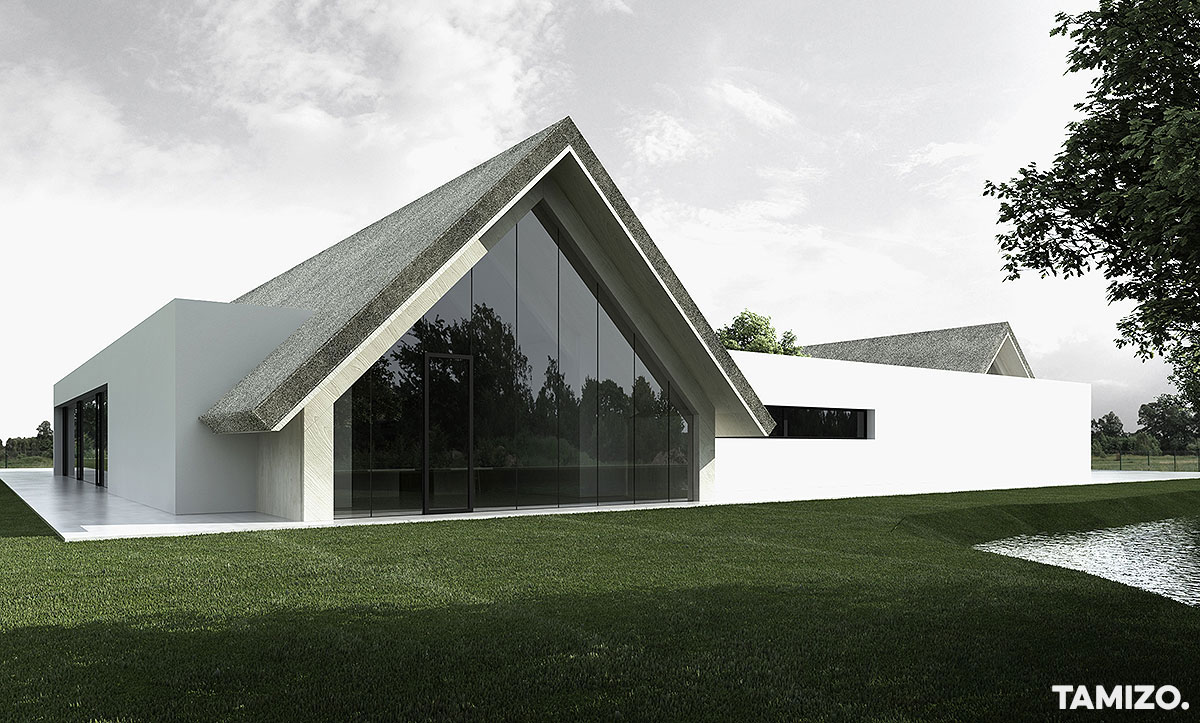 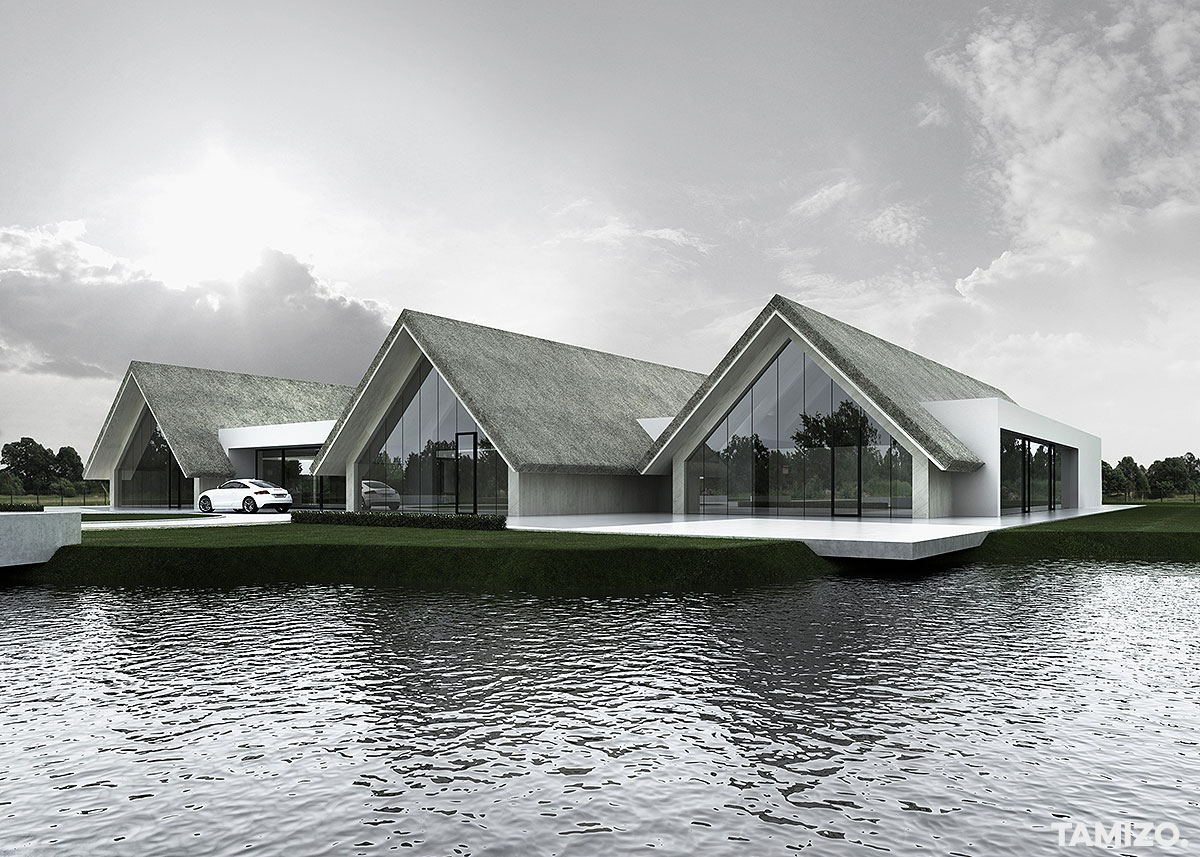 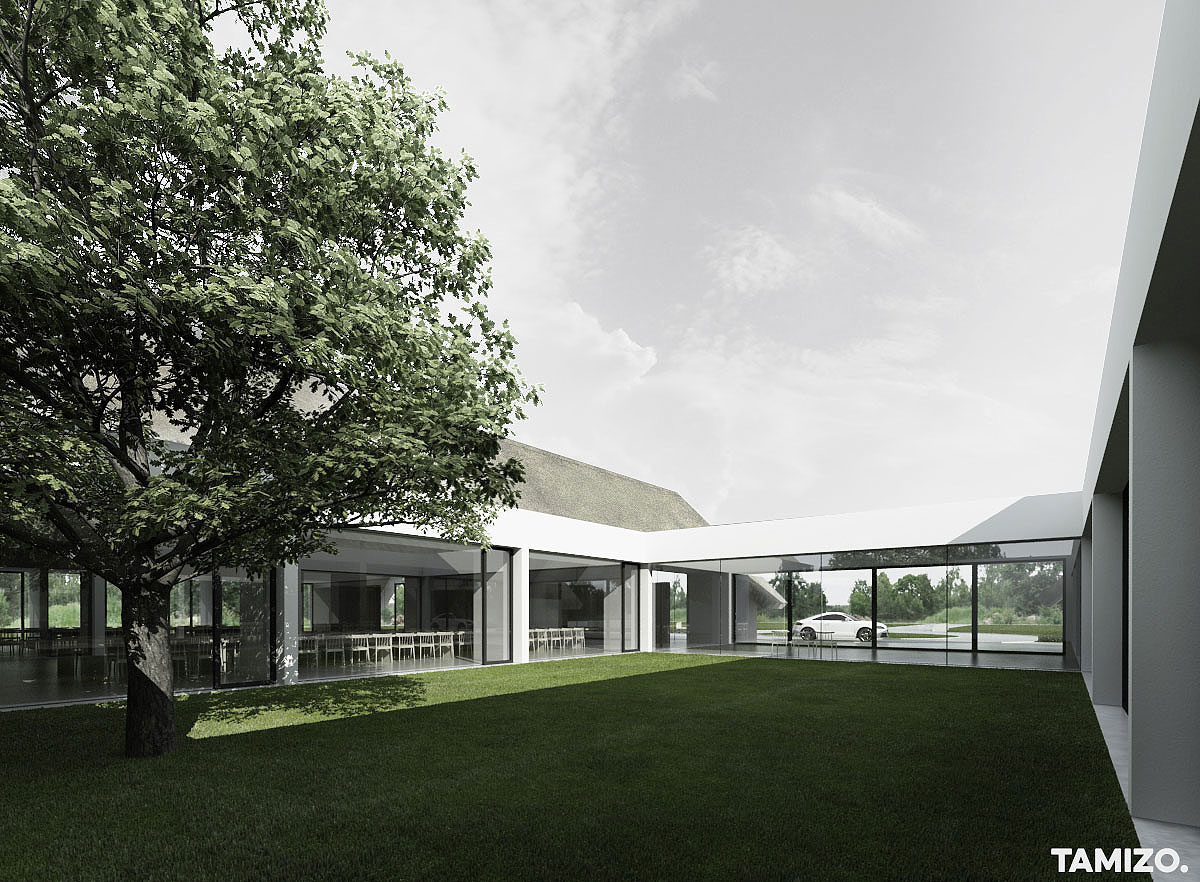 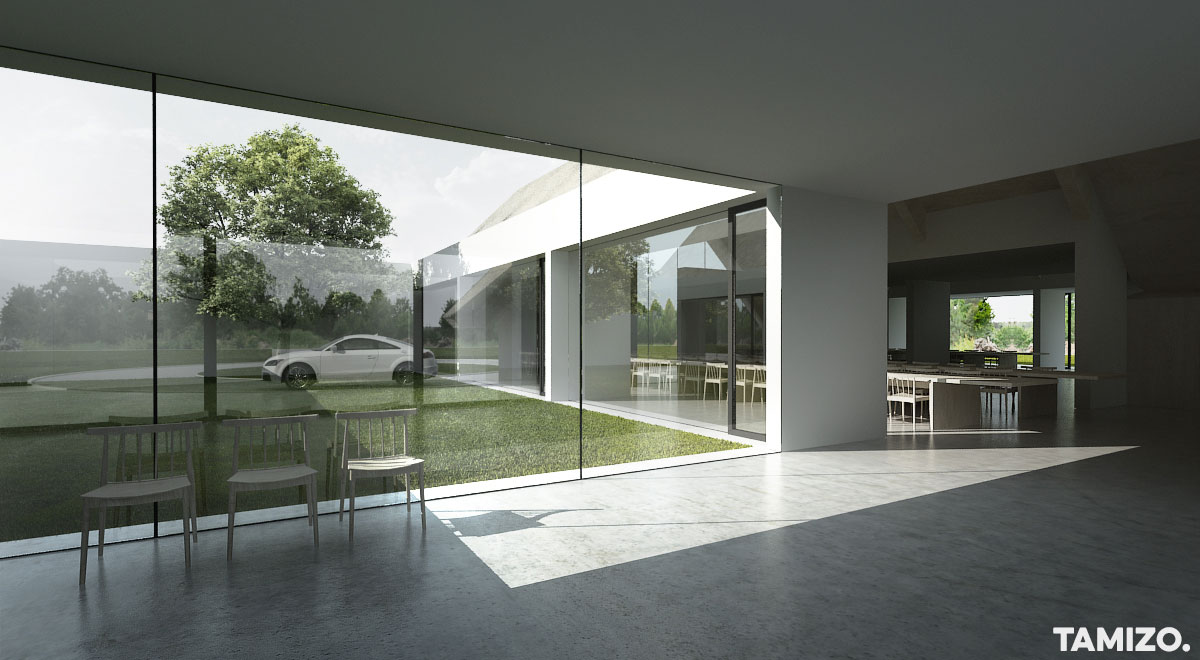 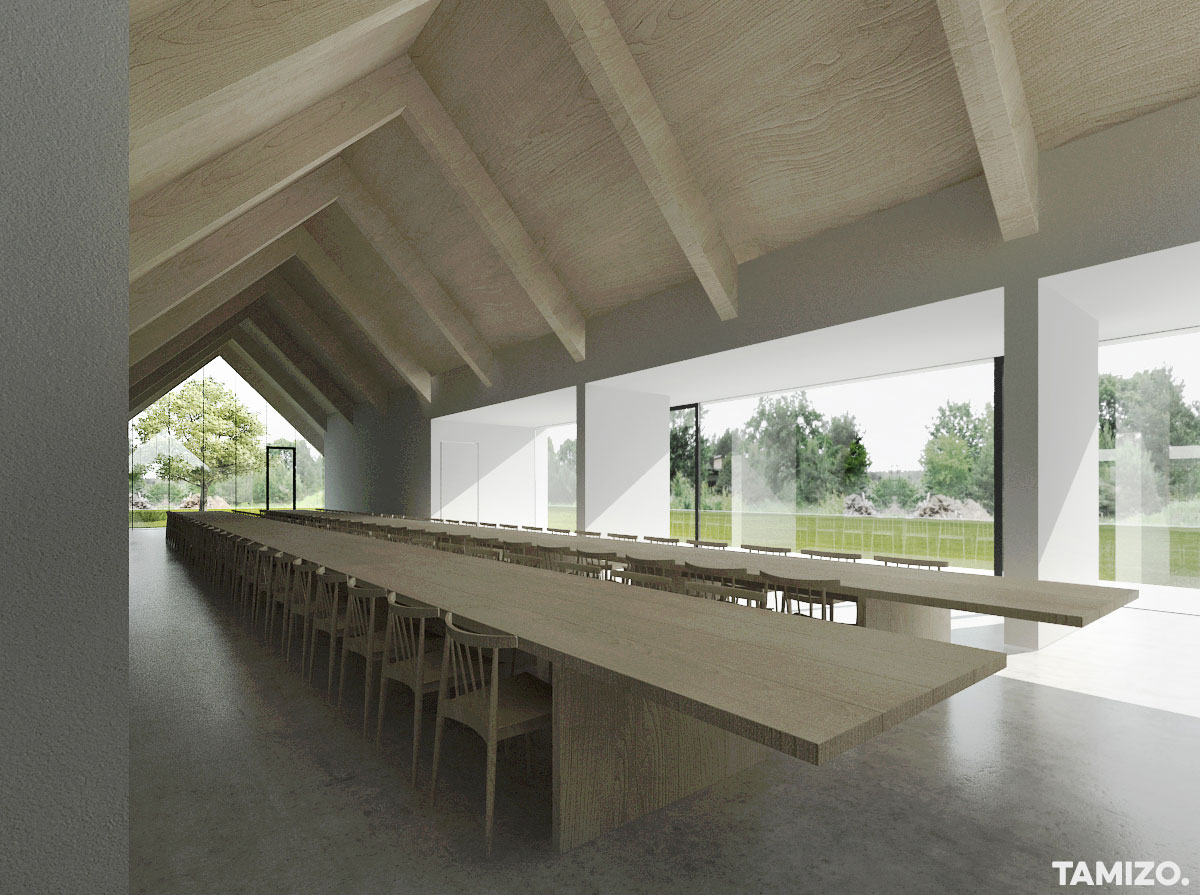 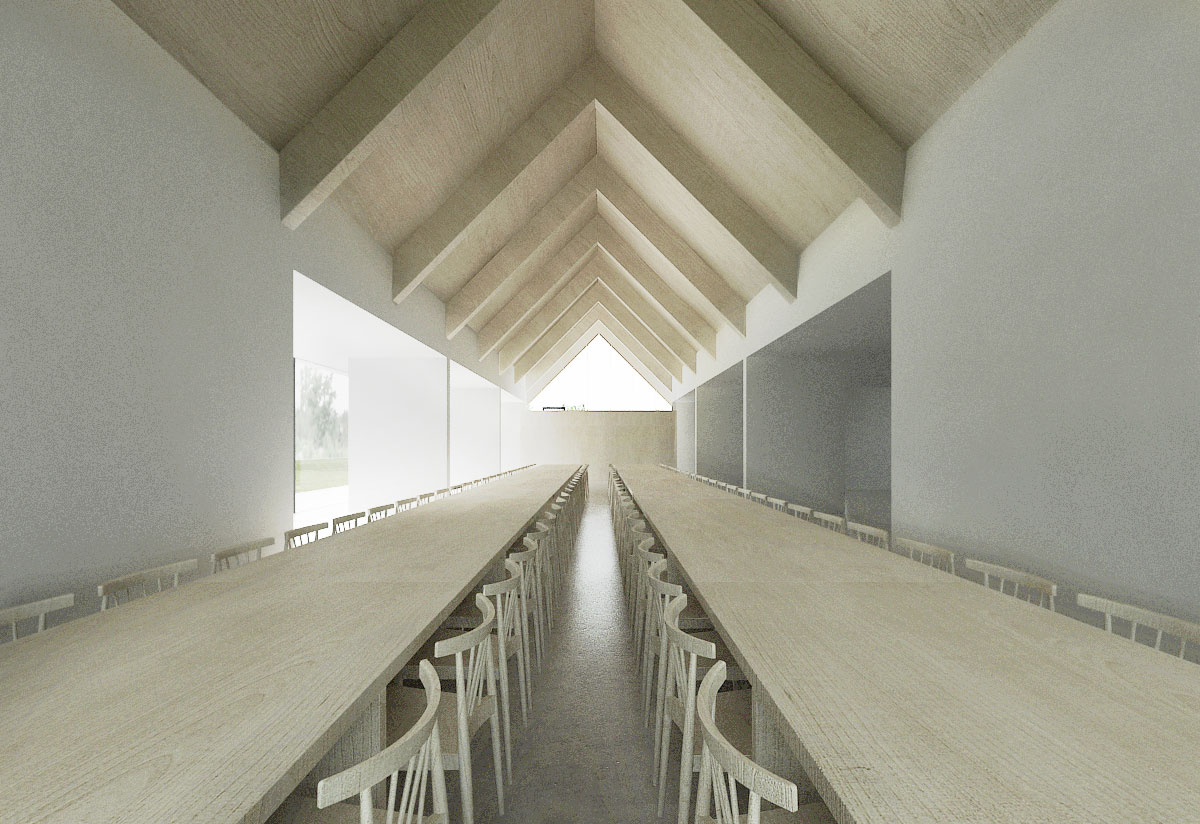 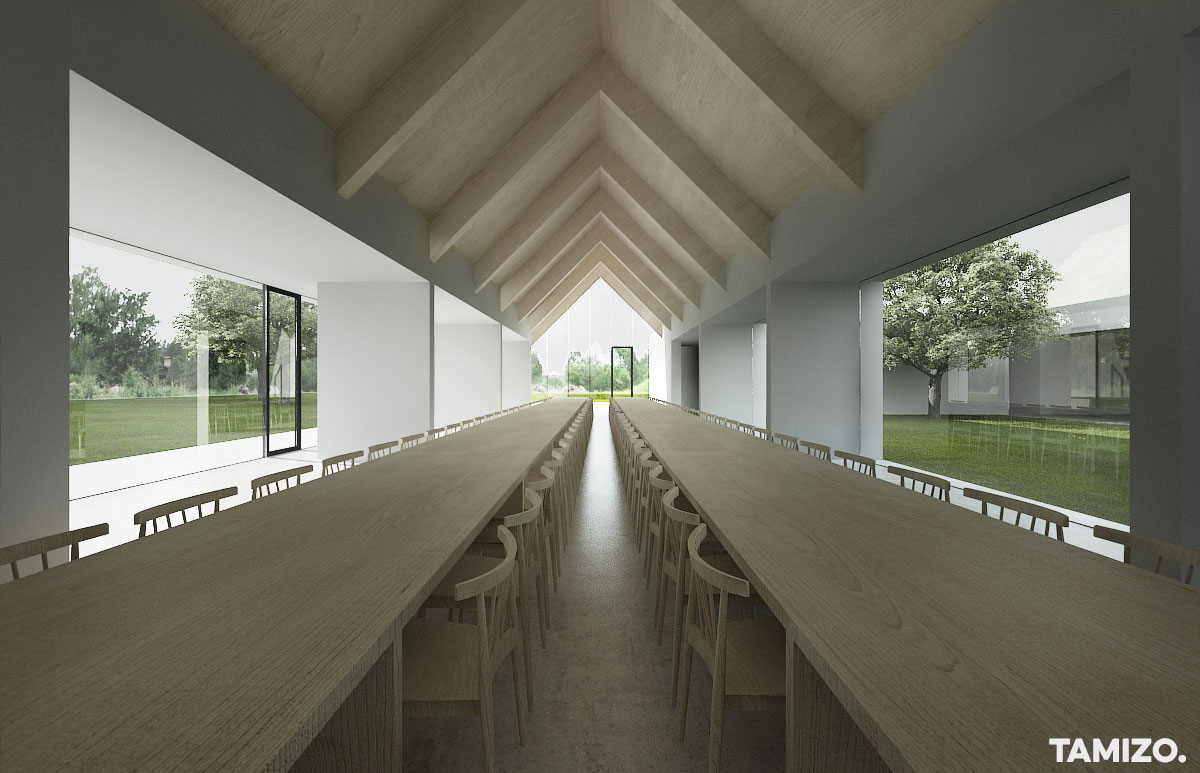 The architecture of the building should be modern but at the same time it should correspond to the surrounding buildings character. That’s why we use typical sloping thatched roofs as a symbol of the village style and simple white walls with big openings as a contrast and symbol of present time architecture.

The openings give a great view at the beautiful landscape. The building consists in 3 separate solids with restaurant areas joined by the main entrance area and the kitchen. In a center of it there is a big rectangular patio.

The second part of the ‘Kamyk Heritage Park’ consists in a small hotel building for the wedding parties guests. It could be designed as a part of the restaurant building, but because of the functional aspects we decided to design it as a separate building. The function was realy simple: six rooms for the parties guests and some technical rooms.

The main challenge was to define solids which could correspond to the scale and character of the village. Our final decision was to tract each hotel room as a separate house. The mix of six different wooden houses with white simple boxes give us an interesting result which was quite different than the wedding house building, but at the same time it suits well to it. The whole concept will be completed by following functions: temporary market with local vegetables, fruits, meats, cheeses… small scene for occasional ceremony, and others… 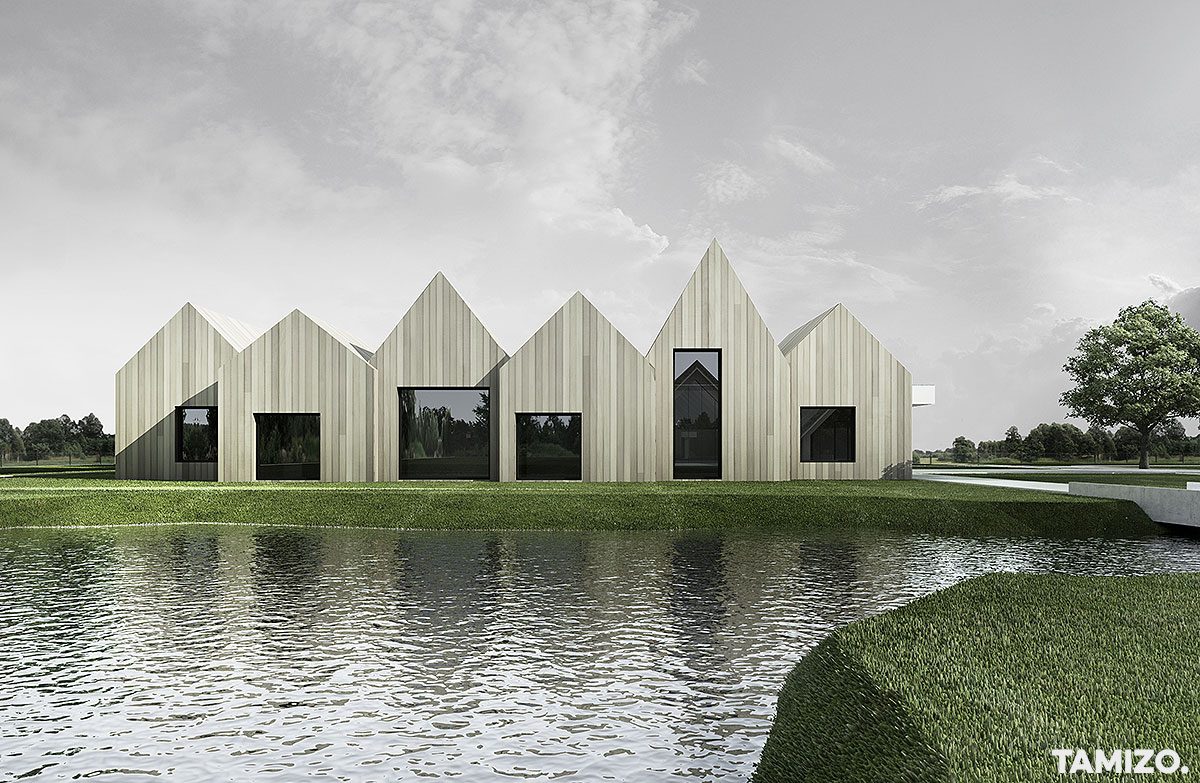 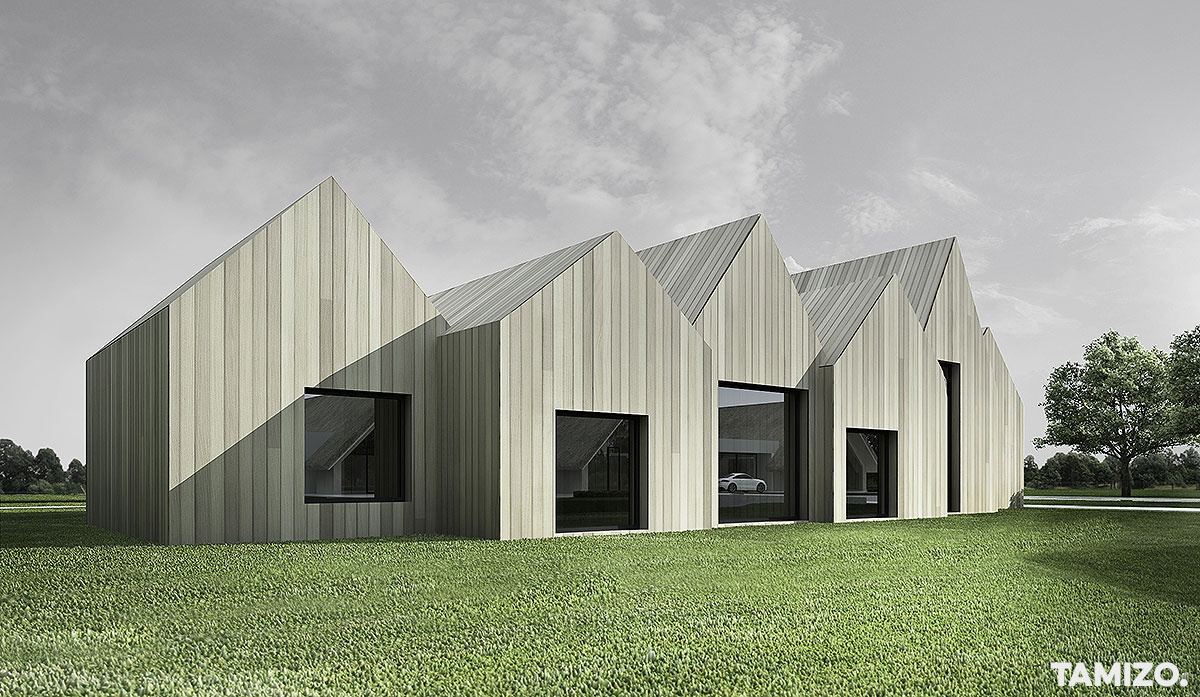 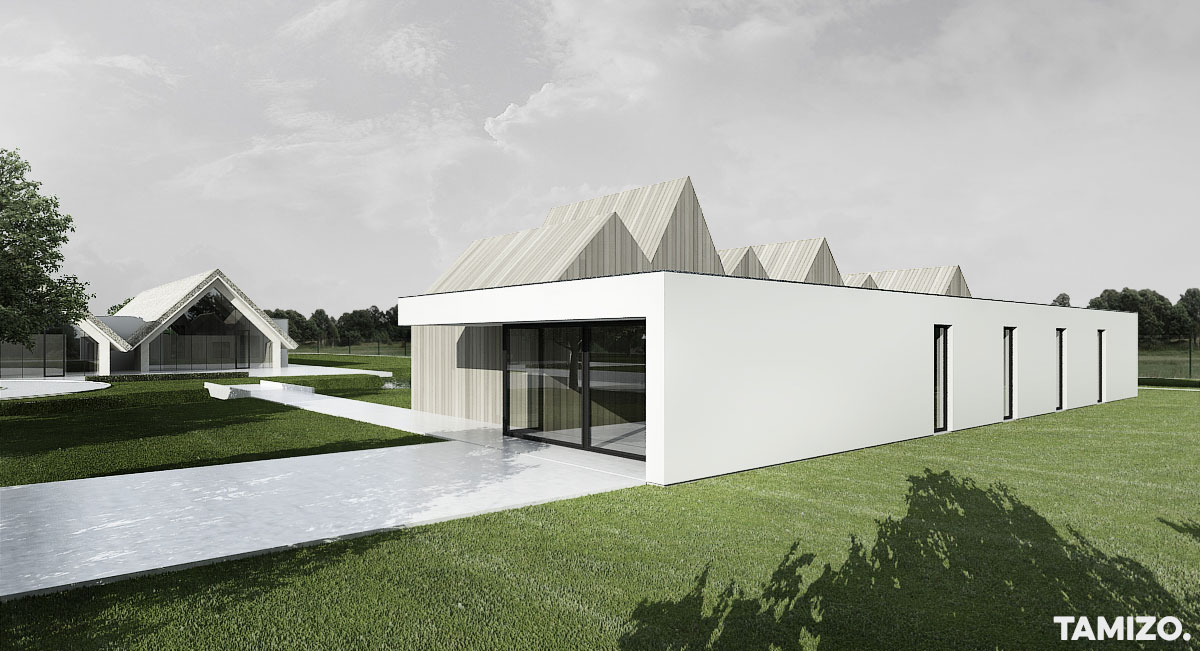 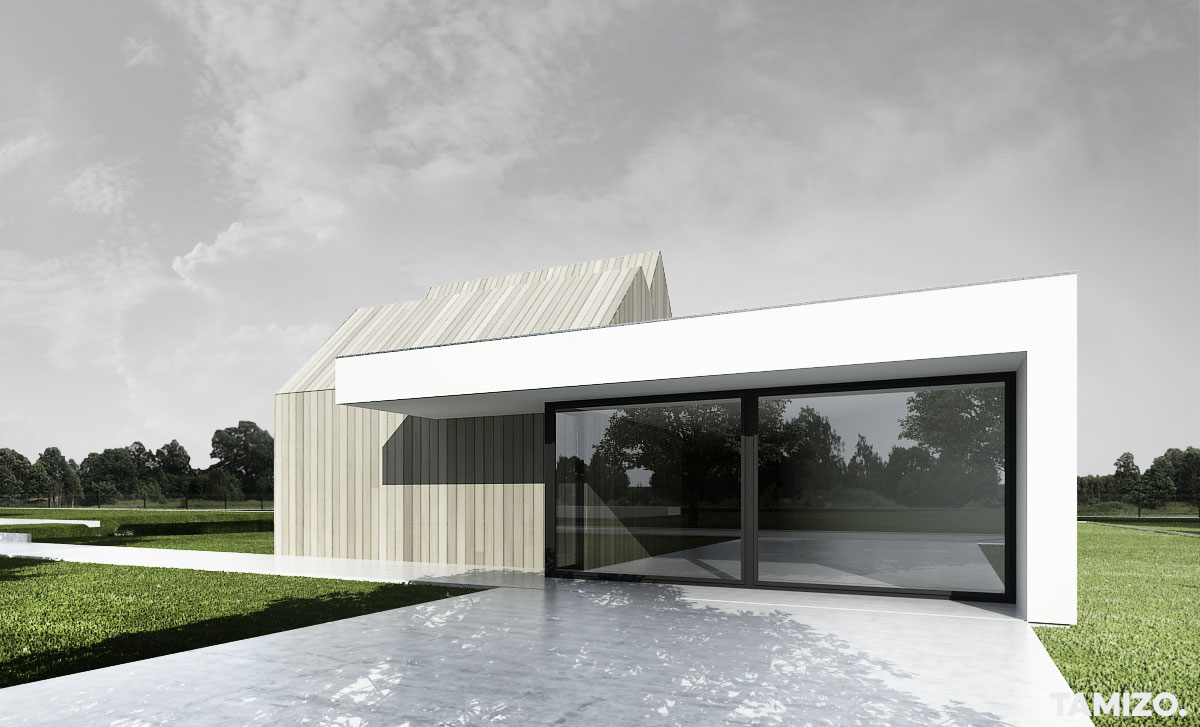 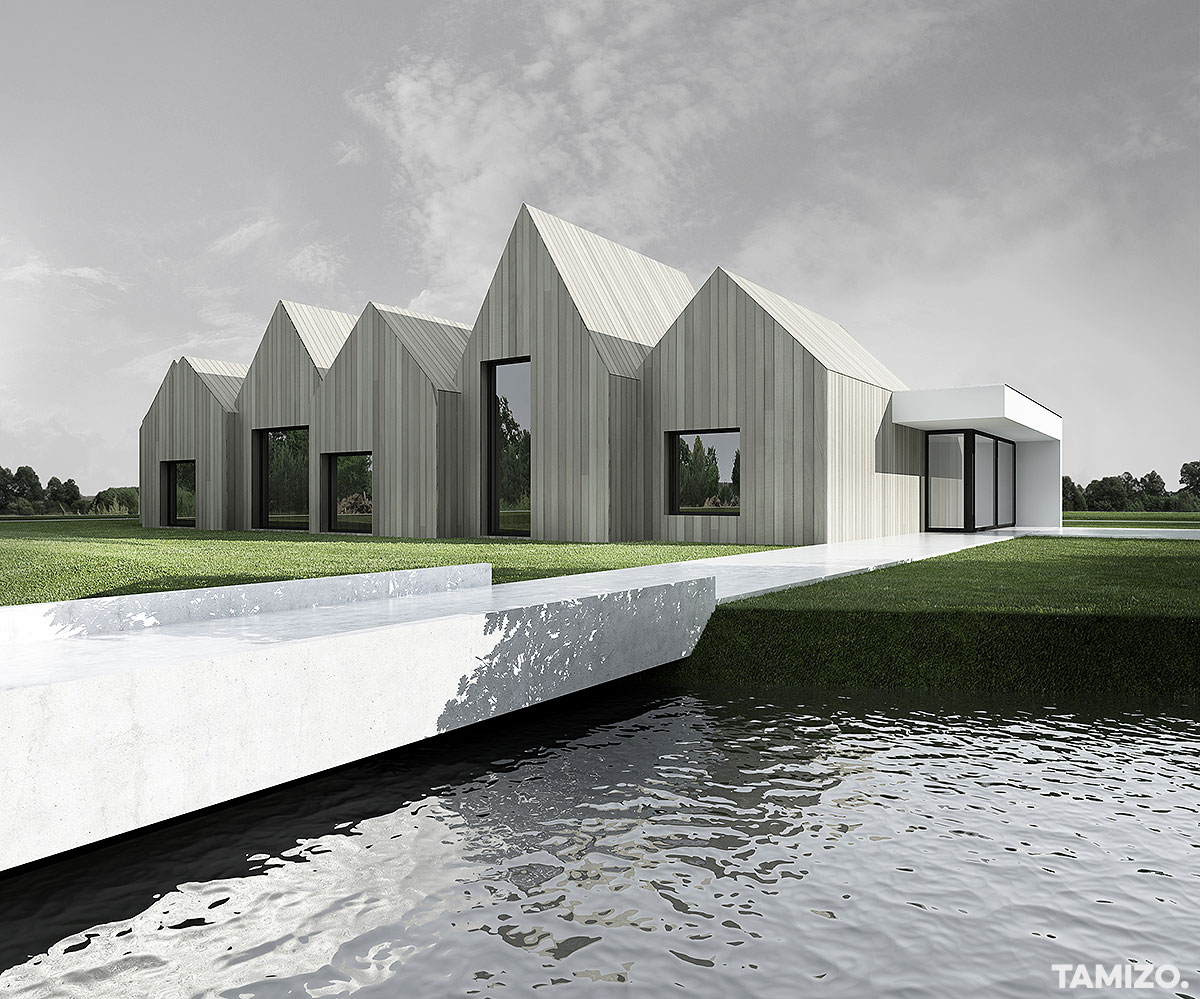